My seventh earth acupuncture/needle insertion takes place in Kingston, NY, on the west side of the Hudson River, representing the throat energy point in the body. I am inserting into the earth, copper spikes wrapped in iron wire, in twelve locations along the Hudson River. The locations represent acupuncture meridian points corresponding to the human spine. I am giving the river and valley a Jin Shin Jyutsu energy-healing treatment called Main Central Vertical Flow (see first post).

The choice of the specific site to insert my needles has created some kind of pull or magnetic force, that draws me to each location that can only be explained as feeling right.

The most powerful ancient sites and monuments throughout the world have one thing in common: the presence of earth energies. Underground water, curry lines, ley-line power centers have the power to alter and uplift human consciousness. Ley lines, found at most ancient and sacred places, are part of the earth's energy system.

Upon reading Crisipin Kott's description of  a an "ancient man-made energy vortex" or "magnetic hotspot" in Kingston formed by a megalithic rock formation, I knew immediately this was the place to insert my copper needle in my on-going Main Central Vertical project along the Hudson River.

My search for the site of Kingston's 'Stonehenge' turned me into a kind of dowser, searching without physical instruments for this rock formation. Its location was described as next to a business parking lot in Kingston Business Park and was deemed historic enough to keep intact prior to the development of two industrial buildings. I imagined it to be, at the very least, a destination marked by a path and sign and easy enough to find.

I was mistaken. It took me three visits and hours of searching through the woods until I decided upon the below formation which looked like it could have been placed and arranged.
A dolmen is described as the feminine gate-womb entrance to the underworld, associated with the phallic pillar, symbolizing the beyond and rebirth.

In my search for Kingston's "Stonehenge," I found two caves which I later discovered were the Kingston Caves.  A now defunct 19th-century mine which produced a high grade of limestone cement known as the Rosendale deposit used to build several American monuments including the Brooklyn Bridge, the Washington Monument and the Statue of Liberty. 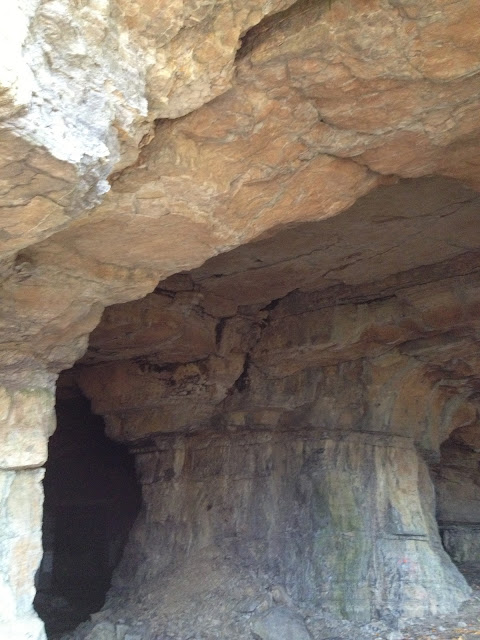 I'm reminded of Plato's allegory of the cave, where prisoners are chained in a cave unable to turn their heads. All they can see is the wall of the cave with a fire burning behind them. Puppeteers behind them hold up puppets that cast shadows on the wall of the cave and the prisoners mistake the appearance of shadows as reality. This 'theory of forms' asserts that non-material forms or ideas possess the highest and most fundamental kind of reality and not the material world known to us through sensation.

"How can you prove whether at this moment we are sleeping, and all our thoughts are a dream; or whether we are awake, and talking to one another in the waking state?"
--Plato
Posted by maincentralvertical at 7:42 AM