"As above, so below."
--Hermes Trismegistus

My ninth earth acupuncture/needle insertion takes place in Catskill NY, on the west side of the Hudson River, representing the middle eye energy point in the body. I am inserting into the earth, copper spikes wrapped in iron wire, in twelve locations along the Hudson River. The locations represent acupuncture meridian points corresponding to the human spine. I am giving the river and valley a Jin Shin Jyutsu energy-healing treatment called Main Central Vertical Flow.

The Hudson River, a tidal estuary, where salt water meets fresh water, is a river that flows two ways in 24 hours in two high and two low tides. The tidal pulse from the ocean is felt from the NYC harbor all the way to Troy, 153 miles away. Originally named Mahicantuck for the "great waters in constant motion."

The Hudson River School of landscape painting, known for its compositions of luminous light and details of nature began with Thomas Cole, a writer, poet, philosopher, observer and painter. Cole wrote his ideas down and referred to his writings when he painted in his studio.

the sun rose from bars of pearly hue

the mist below the mountain began first to be lighted up

a line of light on the extreme horizon was very beautiful

though dark, the mountainside was sparkling

and the Hudson where it was uncovered to the sight

And so it is seemed apt to insert my copper needle at Cedar Grove, the studio of the father of American landscape painting and founder of the Hudson River School of art.
Landscape composition is defined by the horizon line, where earth meets sky. Robert Smithson says if we were to walk to the horizon line, we would never get there:

"The Horizon, in this line where light meets earth, objects cease to exist...One is always crossing the horizon, yet it always remains distant. The horizon line is something other than what it appears; it is closedness in openess, it is an enchanted region where down is up."

M.C. Richards writes about the crossing point, the place inside a plant where the division or decision to grow down into the soil or up into the sunlight takes place. A pull between ascending and descending energy. 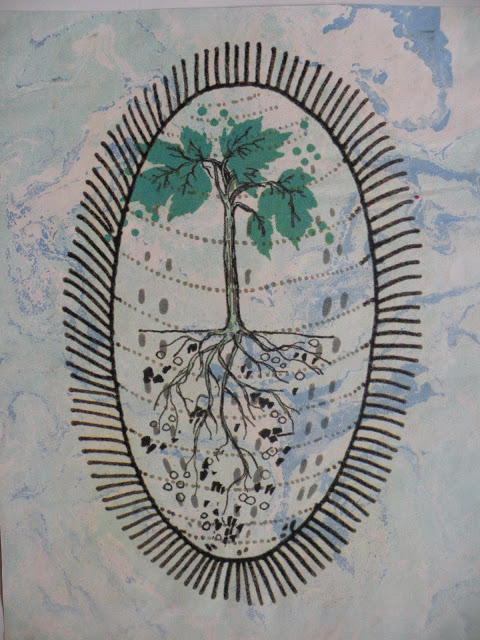 "The crossing point is archetypal...is the name given to the layer of cells out of which the root and the shoot of a plant begin to sprout...a crossing point between earth and sun.  The plant grows in opposite directions simultaneously, down into the earth and up into the light and air. A continuum of opposites."
--M.C. Richards

Humans do not have to decide which way we will be for we are both. 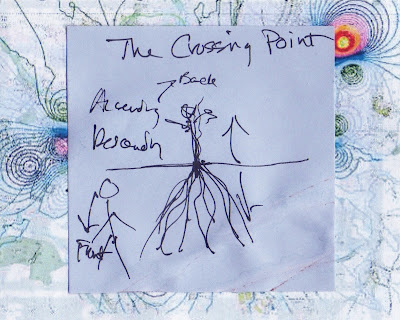 Posted by maincentralvertical at 3:13 PM